Plot of land in Canakkale

Plot of land in Canakkale

Property in Canakkale – With a surface of 363.88 square meters, the property in Canakkale/ Gelibolu offers you space for three villas with a beautiful view of the sea not far away. The view is additionally directed to the longest suspension bridge in the world, which is to be built from 2023.

The price for this plot of land with the Ada Parsel number 218 is only 18.500 Euro (partly developed).

After the building permit there is the possibility to build three villas of 100 square meters each on the plot. In return you give a part of your plot to a builder for his use and after the construction you will receive at least one villa in finished condition without any additional payment.

The prices of the villas in the surrounding area, which also have a breathtaking view of the sea and in the future also the bridge, currently start at approx. 50.000 Euro. In the near future, however, an increase in value is expected due to the centenary of the government and the bridge construction. Nevertheless, you should not expect a profit from your investment until two to three years.

The property Gülcavus/Enez/Edirne, is only 5 minutes walk from the… 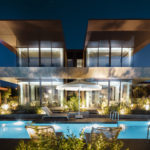